I recently analysed Business and Human Rights data from the Universal Periodic Review using social network analysis tools. Social network analysis is a spatial and mathematical tool to understand how and why relations occur, and employs computational tools like RStudio in order to do so. While this class has explored actor-network theory, complementary social network analysis might be an interesting tool to other aspects of global extraction networks. This initial study revealed a few findings that I thought might be of interest for this class:

The Universal Periodic Review (UPR) is a monitoring mechanism of the Human Rights Council (UNHRC) that reviews the human rights records of all member states. Business and Human Rights (BHR) as an official branch of the UN was established in 2011 under the Ruggie Framework of “Respect, Protect, Remedy”. This growing field of Business and Human Rights has a complicated legacy, not unlike the UPR itself, accused of both complicit bias as well as of pushing for a significant shift in corporate reform, a space previously occupied by corporate-drive social responsibility (CSR) policies.

Through network analysis of all historical UPR recommendations for ‘business and human rights’ issues , I sought to understand how attributes like gross national income and democratic indicators might affect who receives and gives recommendations at the UPR. Through social network analysis, I thought that it might be possible to understand colloquial ideas of power and influence at the UPR: i.e. if “power is money”, or conversely, if the UPR recommendation system might be a “weapon of the weak”. The UPR dataset included 100 countries, and 156 recommendations (both given and received) across all sessions of the UPR.

Originally, I had predicted that the network would reveal a variety of features on both the macro (structural) and micro (node) levels. I had predicted that the network would either be highly dispersed due to the political desire to represent many states at the sessions, or be highly weighed due to certain states being the recipient or giver of recommendations at the UPR. I’d also thought that states were less likely to give and receive recommendations from states that are similar to them in both GNI and along the democracy index (a kind of peer effect). I.e. the UK would not give recommendations to the Netherlands, etc.

However, modeling the data proved some interesting contractions (a link is included at the bottom of this post). The number of countries represented were indeed diverse, and geographically-representative (Figure 1). Figure 2 demonstrated the countries that were seen as having the most number of recommendations (both given and received), which demonstrates a diverse but heavier representation from a few countries (the large blue node is the Netherlands, amongst others primarily from the Latin America and Africa regional groups). Figure 3 and 4 demonstrate a high representation from higher-GNI nations, but a relatively similar representation along the democracy index. Interestingly, figure 5 and 6 demonstrate the weighted nodes of who gave (Figure 6: out-degree) as well as received (Figure 5: in-degree) the most number of recommendations. Again, there is diversity of representation, with a few weighted nodes.

When tested with a statistical model called the ERGM or Exponential Random Graph Model, however, I was able to test the ways in which the network was constructed, as well as possibly account for why. Doing so demonstrated a few interested correlations. The positive and statistically significant values for out-degree GNI (gross national income) attributes indicates that countries are more likely to have a tie (received or given recommendation) the greater the difference in GNI. However, the opposite is the case in democracy indicators: the greater the difference in democracy indicators, the less likely there is a tie between the two nations. On the other hand, analyzing geographical data shows that countries are both more and less likely to give and receive recommendations to countries in their same regional grouping. While Eastern European countries are less likely to recommend or receive, Latin American and Caribbean countries and Western European/Other countries are more likely to do so.

Very interestingly, these network indicated a mixed correlation between geography (pointing to possible strategic alliance and varying histories depending on the regional group), Gross National Income (possible association based on difference), and democracy (peer effect) that warrants further study. It is important to node that there was no democracy index data for small island states, which may have skewed these results. In any case, it’s an interesting find! 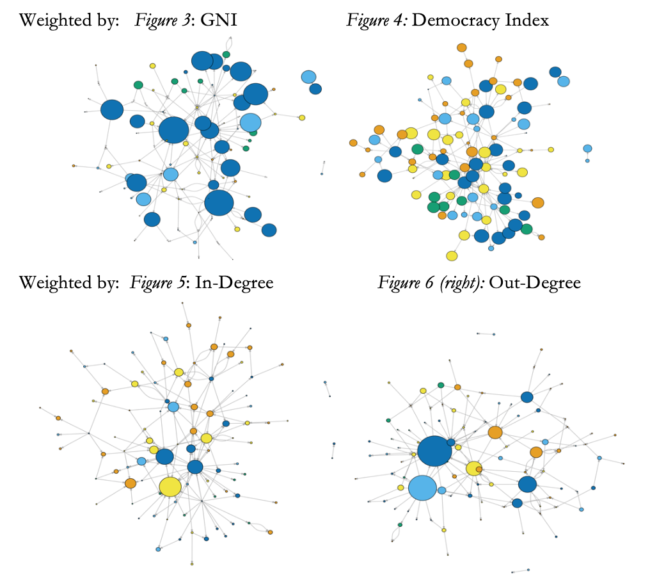 * Geocoded according to UN categories. Palestine attributed to APG (but has no official group).