Geological disposal involves isolating radioactive waste deep inside a suitable rock volume to ensure that no harmful quantities of radioactivity ever reach the surface environment. The waste is contained inside multiple barriers to provide protection over hundreds of thousands of years.

It is not a case of simply depositing waste underground. The multiple barriers that provide safety for geological waste disposal are a combination of:

How does it work? 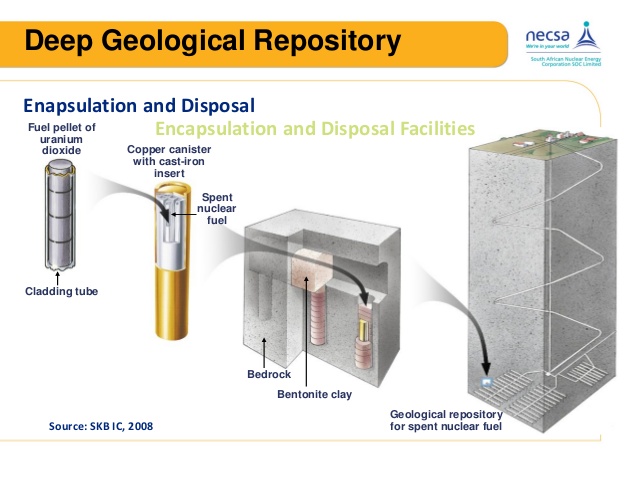 Why a deep geological management of radioactive waste management?

The main objective in managing and disposing of radioactive waste in deep underground is to protect people and the environment : in fact, experts considers that the waste being isolated or diluted away from them reduce the rate and the concentration of any radionuclides returned to the biosphere and that this process is harmless. To achieve this, practically all wastes are contained and managed – some in deep and permanent buria.

Many experts and scientific support that geological disposal can be safe and even technologically feasible and environmentally sound. The World Nuclear Forum recalls that beyond storage, many options have been investigated which seek to provide publicly acceptable, safe, and environmentally sound solutions to the final management of radioactive waste, however, the most widely favoured solution remains deep geological disposal. According to the WNF, the crucial question is on how and where to construct such facilities.

Despite the world excitement, many authors remain sceptical and believe that repositories will contain wastes for so long that leaks might take place in the future and cause high risks for health and environment. One of the challenges facing these supporters is to bring solid proofs and demonstrations of such claims..

China’s siting process began in 1985. Site characterization is underway at a potential site in the Beishan region in northwest China.

Posiva is responsible for the final disposal of the used nuclear fuel of its two owners: Teollisuuden Voima and Fortum Power & Heat.
Posiva’s siting process for a deep geological repository began in the 1980s. Preliminary site characterization and feasibility studies were done at five potential sites from 1986 to 1992. In 2000, the Olkiluoto island in Eurajoki was selected as the site for final disposal. The construction licence application for the repository was submitted in 2012 and granted in 2015.

Andra is responsible for the long-term management of France’s used nuclear fuel. France currently has 59 operational nuclear power plants, with 78 per cent of its electricity coming from nuclear power.

Andra’s siting studies began in 2007, just outside the village of Bure in the Champagne-Ardenne region of eastern France. An application for a deep geological repository construction licence was submitted in 2015.

Germany’s Federal Office for Radiation Protection (BfS) is responsible for the safety and protection of people and the environment against damages due to ionizing and non-ionizing radiation. This includes radiation from sources such as medical diagnostics, mobile communications, and nuclear technology.

BfS is investigating a site for a deep geological repository, but the project is still in its early stages. The process began in 1973, with the Gorleben salt dome selected as repository site in 1977. However, site investigations at Gorleben stopped in 2000. New siting recommendations were issued in 2002, with at least two sites required for underground exploration.

The Government of India’s Atomic Energy Commission (AEC) conducts research on repository development and siting at the Bhabha Atomic Research Centre in Trombay, Mumbai. Siting activities for a planned repository are focused in the northwest Rajasthan region of India.

Nuclear Waste Management Organization of Japan (NUMO) is responsible for ensuring the safe, long-term management of vitrified high-level and long-lived intermediate-level radioactive wastes (the latter is termed TRU waste in Japan) from Japan’s nuclear fuel cycle. The R&D for geological disposal of these wastes are supported by relevant organizations, including the Japan Atomic Energy Agency (JAEA), which is operating off-site underground research laboratories in both crystalline rock and sedimentary rock.

NUMO has been promoting the siting process since its establishment in 2000, with the start of open solicitations calling for volunteers from all municipalities in Japan since 2002. The Toyo town in Kochi prefecture applied as a volunteer to host a repository in January 2007. However, following a municipal election, Toyo town withdrew its application. After the Great Tohoku earthquake and Fukushima Daiichi accident, a range of discussions were held to reconstruct the geological disposal program at the government level. The Basic Policy Plan according to the Designated Radioactive Waste Final Disposal Act was amended in May 2015, including a siting strategy in which the Government of Japan will play a proactive role by nominating “scientifically favourable areas” to assist in resolving the issue of high-level radioactive and TRU waste disposal in addition to helping the Japanese public as a whole, and regional populations, to understand the geological disposal program.

Swedish Nuclear Fuel and Waste Management Company (SKB) is tasked with managing Swedish nuclear and radioactive waste in a safe way. SKB is also engaged in a joint research and development program with Posiva (Finland) and other national organizations, including the NWMO. Sweden currently has 10 operational nuclear power plants, with 50 per cent of its electricity coming from nuclear power.

SKB’s siting process began in the early 1990s. Feasibility studies were done in eight municipalities. From 2002 to 2008, detailed underground evaluations were done on two potential sites in Östhammar and Oskarshamn. SKB selected the Forsmark site in Östhammar in June 2009. It applied for a deep geological repository construction licence application in 2011.

Nagra’s siting process began in 1972. Zürcher Weinland was originally identified as a potential siting region. However, in 2005, the Swiss government requested that Nagra identify other alternative regions. In 2007, the Swiss Federal Office of Energy issued a “Sectoral Plan for Geological Repositories” for public review. The Swiss Federal Council approved the strategic part of the plan. Potential sites are now being evaluated.

The Nuclear Decommissioning Authority (NDA) is tasked with implementing government policy on higher activity radioactive waste and developing a low-level waste strategy. It engages in co-operative research with other national radioactive waste management organizations around the globe.

In 2007, the NDA established the Radioactive Waste Management Directorate to develop a geological disposal solution. In 2007, the Department of Environment, Food and Rural Affairs issued framework document for public consultation. The government invited communities for “no commitment” discussions on hosting a repository.

The Department of Energy (DOE) is dedicated to safe disposal of waste, including the safe and efficient management of spent nuclear fuel for disposal in a geologic repository. The United States currently has 104 operational nuclear power plants, with 19 per cent of its electricity coming from nuclear power.

The DOE engaged in a screening of nine candidate sites from 1983 to 1986. In 1987, Congress directed it to study only one site, Yucca Mountain, located near a nuclear weapons test site in Nevada. In 2002, the Secretary of Energy recommended Yucca Mountain to the President. While the President approved the site, the State of Nevada strongly opposed it.

In 2009, the government indicated that Yucca Mountain was no longer an option. A Blue Ribbon Commission was formed to provide recommendations for developing a safe, long-term method to manage nuclear waste. In 2013, the Administration issued its Strategy for the Management and Disposal of Used Nuclear Fuel and High-Level Radioactive Waste, a framework for moving toward a sustainable program for managing the country’s used fuel.

For more information on the subject: http://www.world-nuclear.org/information-library/nuclear-fuel-cycle/nuclear-wastes/storage-and-disposal-of-radioactive-waste.aspx