For thousands of years, indigenous populations have used different forms of fertilizer to grow crops. In Latin America and Oceania, the use of excrement, eggshells, and carcasses of seabirds, bats, and seals has helped crops flourish even in poor soil. In Quechua, they called this wanu. Most wanu is found on remote oceanic bird-nesting islands off the coasts of Peru, California, and parts of Africa such as South Africa – really anywhere in hot climates where birds roost and there’s little rain. There is a Quechua legend about the origin of these wanu islands off the Peruvian coast, which talks about the balance between life and death, the mountains and the sea, the fish and the birds and the ecosystem. Certain Andean populations also considered themselves ‘bird people’ and viewed birds as their ancient kin. This meant carefully management and rationing of wanu by the Incas – some groups applied a death sentence to those who disturbed nests or slaughtered the birds.

When the European colonizers showed up, they stole the land, murdered many of its inhabitants, and in the process, appropriated knowledge about wanu, which eventually turned into the Spanish word, guano. Over time, the Spanish began to use it and export it back to Europe in large quantities. 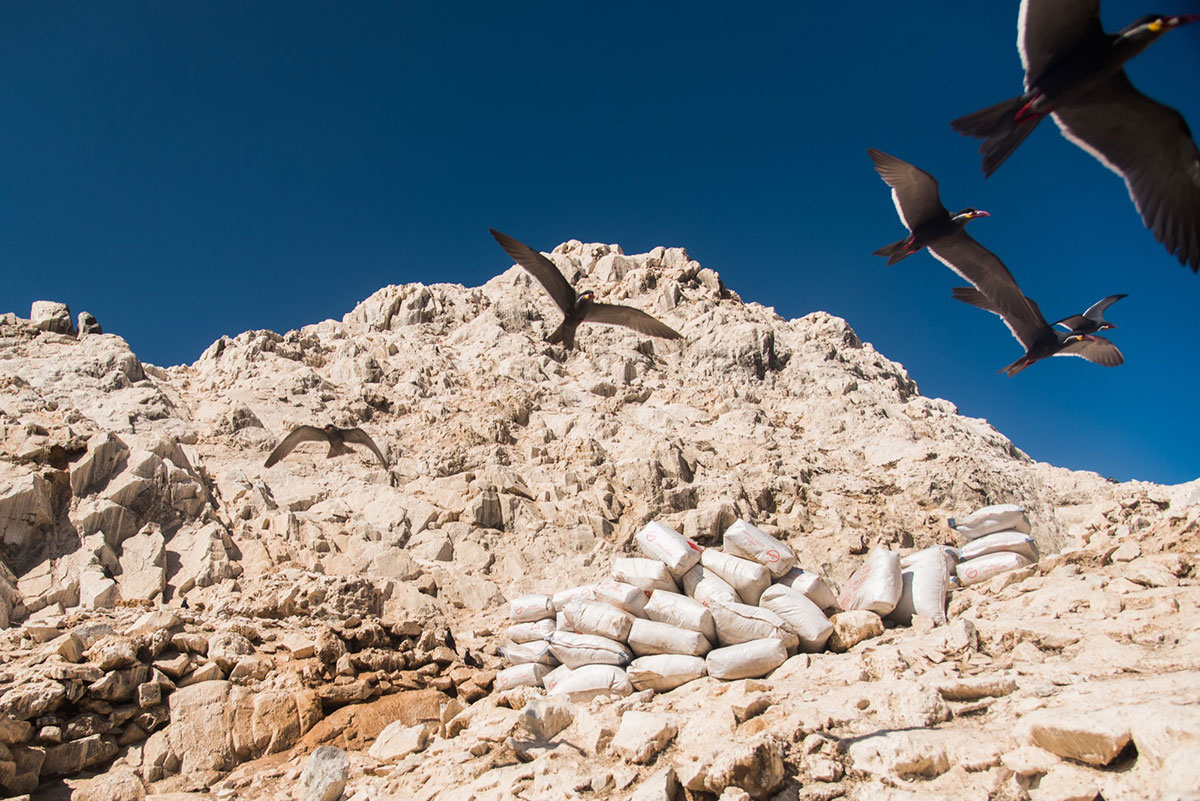 One of the sites of modern-day guano extraction off the coast of Chile (Berta Tilmantaite/Al Jazeera) https://www.aljazeera.com/indepth/inpictures/2017/08/collecting-guano-coast-chile-170801112013159.html

When the Industrial Revolution came, North American and other European powers arrived, looking for more of this guano to help meet their rising farming needs and imperial aspirations. During the 1840s, guano, otherwise called “white gold” became popular in British agriculture. In 1842, a U.K. trading company, Antony Gibbs and Sons, entered the fold and just a mere 6 years later, the company got rich off of guano and established for itself a worldwide monopoly. One jingle declared, “Mr. Gibbs made his dibs selling the turds of foreign birds.”

The Peruvian government additionally found that trading with the British proved to be profitable and so guano became crucial to the Peruvian economy during the 19th and early 20th century. The British meanwhile viewed these vast guano reserves as ‘there for the taking.’

From 1840 to 1880, otherwise known as the Guano Age, Peru dominated the trade and their guano was known to be the best. US farmers though, wanted to jump on the guano bandwagon as well. American attempts were made to burst the UK’s monopoly, but none were successful. Until in 1856, the US government introduced the Guano Islands Act which allowed American citizens to claim and annex any unoccupied islands containing guano. This law, which was one of the founding acts of American imperialism, resulted in the annexation of some islands in the Pacific as well as the Caribbean. The law still stands today.

Two wars were additionally fought in part over possession of the islands and its resources: the Chincha Islands War and the War of the Pacific in the 1880s.

Mining this guano from the islands required a lot of labor, and thus came other forms of exploitation.

In the 1860s, Peruvians and participating countries made slave raids in Polynesia and China, destroying smaller Pacific islands and kidnapping people or conning them into thinking they were headed to California for the gold rush. Once brought to the guano islands, they lived in barracks as indentured laborers and were forced to hand dig and transport tons of guano onto ships to be exported. The exploitation was so harsh that many killed themselves rather than dig through hardened ammonia rock under the hot and dry sun. Guano and its ammonia dust also caused numerous health problems namely, eye irritation, lung acid burns, and the transmission of feces-borne pathogens.

Intensive extraction over just a few decades ruined the habitat of the guano birds that were either scared off or slaughtered, and thus led to a decline of the guano trade. By the mid-twentieth century, the Peruvian government enforced stringent environmental regulations over the islands to improve habitat conditions and prevent overfishing.

The advent of synthetic fertilizers also helped to decrease demand, although it causes environmental problems in other dimensions. Lastly, the exploitation by the British and other nations also left the Peruvians in debt.

Today, guano is mined at a much lower and perhaps ‘sustainable’ rate, with domestic and international uses, particularly for organic markets. The bird populations though, have been substantially reduced and extinctions remain a risk, especially with the growing threat of climate change.

Duffield wrote in 1877, Peru in the Guano Age; ‘when I first saw them (guano islands) twenty years ago, as once tall and erect like living things… now they looked like creatures whose heads had been cut off… that reminds one of death and the grave.’
Unlike the indigenous populations inhabiting the land before, these colonizer groups had no creation stories, no respect, and no framework for knowledge or consideration for the material or the animals themselves. The knowledge was appropriated, the resource was named, and the colonizers moved to possess wanu through extractive means. And thus, like many other resources, there was a boom and eventually, a bust.

The History of American Imperialism, From Bloody Conquest to Bird Poop (NPR)

Guano: The White Gold of the Seabirds (Intech Open)

Guano and the Opening of the Pacific World (Book Intro, G. Cushman)

What a load of guano: 5 facts you didn’t know about bird poop (National Museum of American History)

Are We Entering a New Golden Age of Guano? (JSTOR)

VIDEO: One century on, the guano boom is back (AFP News Agency)