INDIA’S “sand mafia” is doing a roaring trade. The Times of India estimates that the illicit market for sand is worth around 150bn rupees ($2.3bn) a year; at one site in Tamil Nadu alone, 50,000 lorryloads are mined every day and smuggled to nearby states. Gangs around the country frequently turn to violence as they vie to continue cashing in on a building boom.

Much of the modern global economy depends on sand. Most of it pours into the construction industry, where it is used to make concrete and asphalt. A smaller quantity of fine-grade sand is used to produce glass and electronics, and, particularly in America, to extract oil from shale in the fracking industry. No wonder, then, that sand and gravel are the most extracted materials in the world. A 2014 report by the United Nations Environment Programme (UNEP) estimates they account for up to 85% by weight of everything mined globally each year. 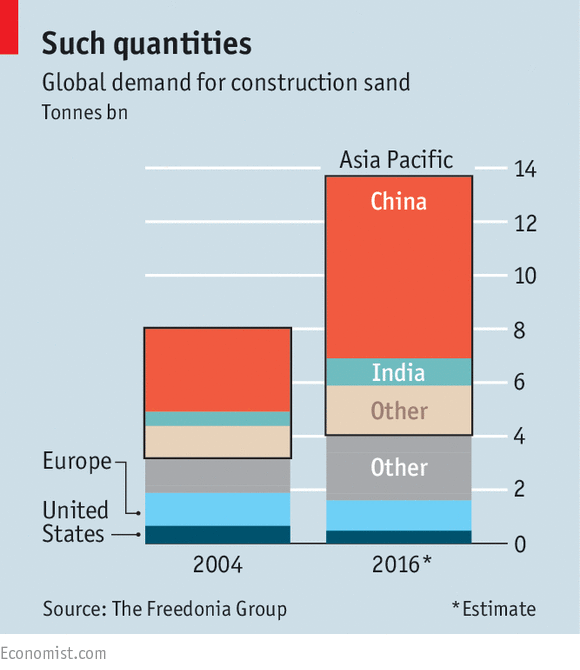 Sand often makes up the very ground that is built on, too. By virtue of dumping vast quantities of sand into the sea, Singapore is now over 20% larger than it was when it became independent in 1965. China and Japan have reclaimed even greater swathes of land, and China has outraged global opinion by building artificial islands on disputed rocks in the South China Sea. Elsewhere, reclamation has been an unhappy necessity: the Maldives and Kiribati have had to counter rising sea levels by taking sand from smaller islands or the seabed to shore up larger ones. As sea levels rise further, and urban populations swell—the UN predicts a rise of almost 1bn by 2030—sand will be even more sought after.

Sand may appear plentiful, but is in fact becoming scarce. Not all types are useful: desert sand is too fine for most commercial purposes. Reserves also need to be located near construction sites; as transport costs are high compared with the price, it is usually uneconomical to transport sand a long distance. That, though, does not stop countries with limited domestic resources (and deep pockets). Singapore and Qatar are big importers; the Burj Khalifa skyscraper in Dubai was built using Australian imports.

Sand is being extracted at a far greater rate than that at which it is naturally replenished, and the depletion of existing reserves is damaging the environment. Dredging in rivers and seas pollutes natural habitats, affecting local fishing and farming industries. Mining in China’s Poyang Lake—which the UNEP reckons may be the world’s largest sand-extraction site—is thought to have lowered water levels. Beaches in Morocco and the Caribbean have been stripped of sand, lowering their capacity to absorb stormy weather. As a recent report on emerging environmental problems by a team of scientists, led by William Sutherland at the University of Cambridge, points out, those risks will only grow as sand-scarcity worsens.

In the West such concerns have led to restrictions on where sand can be mined. In America, for example, mining it offshore or near large residential areas is restricted. Regulations are in place in many developing countries too. Thinning coastlines, and the disappearance of some islands altogether, led Indonesia and Malaysia to ban sand exports to Singapore. Myanmar banned sand mining on some beaches, and Cambodia and Vietnam placed restrictions on exports.

But the rules are not always enforced. Indian officials charged with monitoring mining tend to be intimidated by the “mafia”, alleges Sumaira Abdulali of Awaaz Foundation, a charity in Mumbai; even if gangs have permits, they get away with mining well above legal limits. The state makes little effort to track sand, so illegally mined grains can be traded relatively easily. The UNEP estimates that half of all sand used in construction and industry in Morocco comes from illegal coastal mining. The beaches, ironically, are being stripped to help build tourist infrastructure. In Cambodia charities allege that recorded exports of sand to Singapore have been systematically underreported to cover up illegal mining. (The Cambodian government responded in November by suspending all sand exports.)

Substitutes for sand do exist. Mud can be used for reclamation, straw and wood to build houses, and crushed rock to make concrete. Asphalt and concrete can be recycled. Production processes will shift towards these alternatives as the price of sand rises, argues Freedonia’s Zoe Biller. In some rich countries that shift is already under way, encouraged by government policy. According to Britain’s Mineral Products Association, 28% of building materials used in Britain in 2014 had been recycled. European plans to recycle 75% of glass by 2025 should lower demand for industrial sand. Singapore plans to rely on Dutch expertise for its next reclamation project. Using a system of dykes and pumps, this will be less dependent on sand.

Reduced demand from Singapore might discourage illegal mining in nearby countries. Rising prices will eventually force developing-country builders to explore alternatives to sand. But without better law enforcement, high sand prices also make illicit mining more lucrative. Despite the damaging consequences, the sand mafia will continue raking it in for a while