Turkish Stream Pipeline Project is the successor of the canceled South Stream Pipeline Project. After Turkey downed Russian fighter jet, the relations between Turkey and Russia were strained. However, with the apology coming from Turkey, the landscape was about to change. Mutual steps ameliorated the bilateral relations and finally, Russia dropped down South Stream which was by-passing Turkey and introduced Turkish Stream as new ambitious pipeline project. The project was deemed as Russia is securing its market share in Turkey which has been attempting to diversify its natural gas procurement.

When we look at the itinerary of the project, it is obvious that Russia is by-passing Ukraine due to the ongoing conflict between Kiev and Moscow. Turkish Stream is not the only gameplay of the Kremlin. They announced another project through Baltic Sea in the direction of Germany. However, European Union is not that much keen on new pipelines due to the %57 of capacity usage considering the further implementation of Turkish Stream. The demand from Europe will likely to decrease.

Current Status of the Construction

Estimated date of operation is 2019. When it will be completed, the capacity of the project will be double size of the extant Blue Stream Project.

In the Turkish side, the environmental impact assessment was obtained but the Ministry of Energy is still collecting the objections coming from NGOs. In particular, marine biologists from 9 Eylül University of Izmir are extensively working to verify the assessment. The controversial nature of the project is a fertile ground for possible lawsuits based on environmental considerations.

It was reported that new U.S. Sanctions against Russia would delay the completion date of the project. Although there is no direct mention against the Turkish Stream project itself, analysts consider there is a considerable risk. U.S. has already expressed its discontent with the current course of the project.

There is a parallel construction on the way namely TANAP (Trans-Anatolian Pipeline Project). This project is aiming to transport Azeri gas to Europe. In this equation, Iran is the game changer due to the partial lift of sanctions against Iran. Therefore, Iran is considering to be part of the project so as Turkmenistan. However, the experts consider that only if Iran and Turkmenistan join the project and the capacity reaches 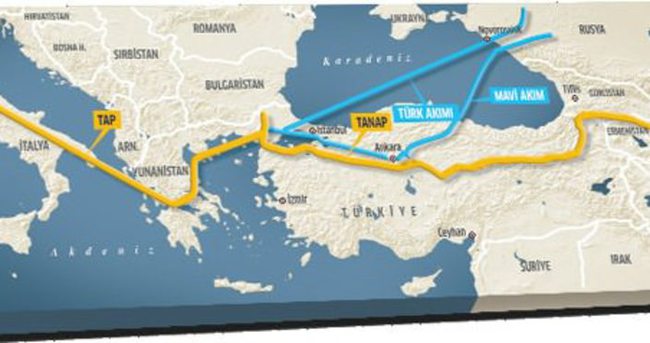 its climax, TANAP would be a rival to Turkish Stream Project.

Although Turkey suffers significant political tensions due to domestic politics and security threats. However, Turkey maintained its key position as the reliable bridge between the supply and demand lines of energy. Controversies are likely to last for next couple year until the project become fully operative.