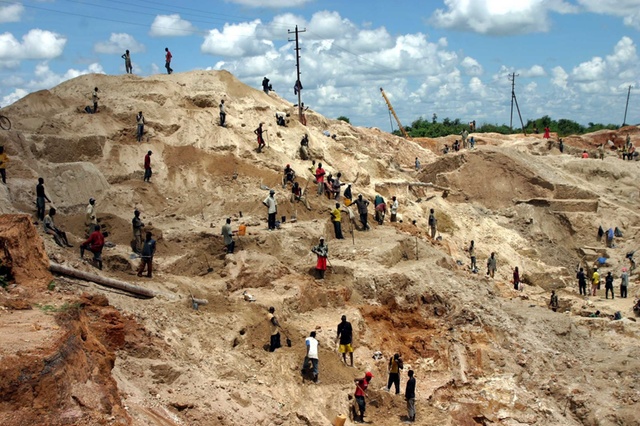 Because of the global nature of the resource extraction industry and the variety of actors involved, states are no longer the only ones to have power, and thus sovereignty, over their own land. Rules and institutions on the international level have been proliferating, but following very different trends of development. When the mining industry causes disruptions on a variety of levels, from human rights to environmental concerns, we may wonder how international legal and institutional frameworks can regulate the global extraction industry. While human rights frameworks are widely studied and known, environmental regulations are still developing. The case of the DRC’s mining sector, which has been largely mediatized for decades, reveals how different levels of authority, from national governments to international institutions, struggle to implement regulations and durably change in the environmental practices of firms operating in the region.

In the Katanga region, major contractors consistently create air pollution as they extract minerals such as cobalt and copper, causing local populations to be exposed to dust and increasing the risk for them to develop lung diseases. Most corporations discharge their waste water in the environment, contaminating the water and soil that are also used for agriculture by populations living nearby. These practices cause major health problems but also decrease the livelihoods of local populations, as several areas become improper for agriculture or water collection.

While many first-world countries, such as the US and the EU, have their own environmental regulations, less-developed countries often have weaker institutions and therefore struggle to regulate the mining industry. In the case of the DRC, the 2006 constitution already included environmental considerations. Yet only 1% of the national budget is allocated to environmental protection, and most of it is not directly used in the field of mining. Because the sector is at the heart of many different challenges related to security and human rights, environmental concerns tend not to be prioritized by the government. For example, the regulatory body in charge of the mining industry focuses mainly on traceability and transparency.

At the international level, the DRC is part of several regional organizations, such as the African Union, that have their own multilateral environmental legal agreements. However, those regulations are either not covering the mining industry or not effectively applied by the government. Beyond the regional level, international environmental law has also sought to provide a set of regulations to better protect the environment including against practices in the mining industry. Since the 1970s, many regulatory frameworks have been developed, mainly by the UNEP, UNECE and the OECD. However, the set of existing regulations is not comprehensive and fails to cover the full mineral development process, from prospecting and exploration to extraction, reclamation and liability. Regulations tend to focus mainly on problems related to access, by restricting or banning the exploration and exploitation of land. Moreover, most of those legal frameworks for the mining sector suffer from weaknesses that are common in international law, such as a lack of enforcement mechanisms and a strong reliance on the political will of national governments to comply with the regulations. Because of the variety of national interests, environmental laws are also often non-binding, and thus remain as vague soft rules that are only applied by states that have an interest in doing so.

However, other international actors such as non-governmental organizations can have a direct impact on affected populations. Around the world, NGOs have played a very important role in mobilizing both national and international actors, and putting environmental problems on the political agenda of important stakeholders, including corporations. In the case of the DRC, local populations struggled to gain any leverage on companies operating in the region, including in the scandal surrounding Glencore, a Swiss company that was exploiting cobalt and copper in Katanga. When suffering from the corporation’s bad practices, the locals didn’t see any way to have their voices heard and force Glencore to change its practices. The judicial system was not considered as an option since the locals didn’t trust their institutions to resist the pressure of powerful companies. However, new processes enabled local populations to forego the dis-functioning national institutions and take their issue straight to the international level. A procedure was started by an NGO from the DRC against Glencore at the Responsible Business Initiative, in Switzerland. Such initiatives have become increasingly common, with local and international NGOs reaching out directly to the judicial system or to organizations in the home country of firms operating or contracting in the DRC. As international regulations remain weak and local institutions often fail to support their own populations, such a strategy to go directly from the local to the international level may improve the chances of local actors to put sufficient pressure on international corporations operating in their countries. In that dynamic, the new trend to extend the legal standards of first-world countries were many multi-nationals are based to the countries where they operate may bring new hope for populations that are suffering from environmental and human rights abuses in less-developed countries.