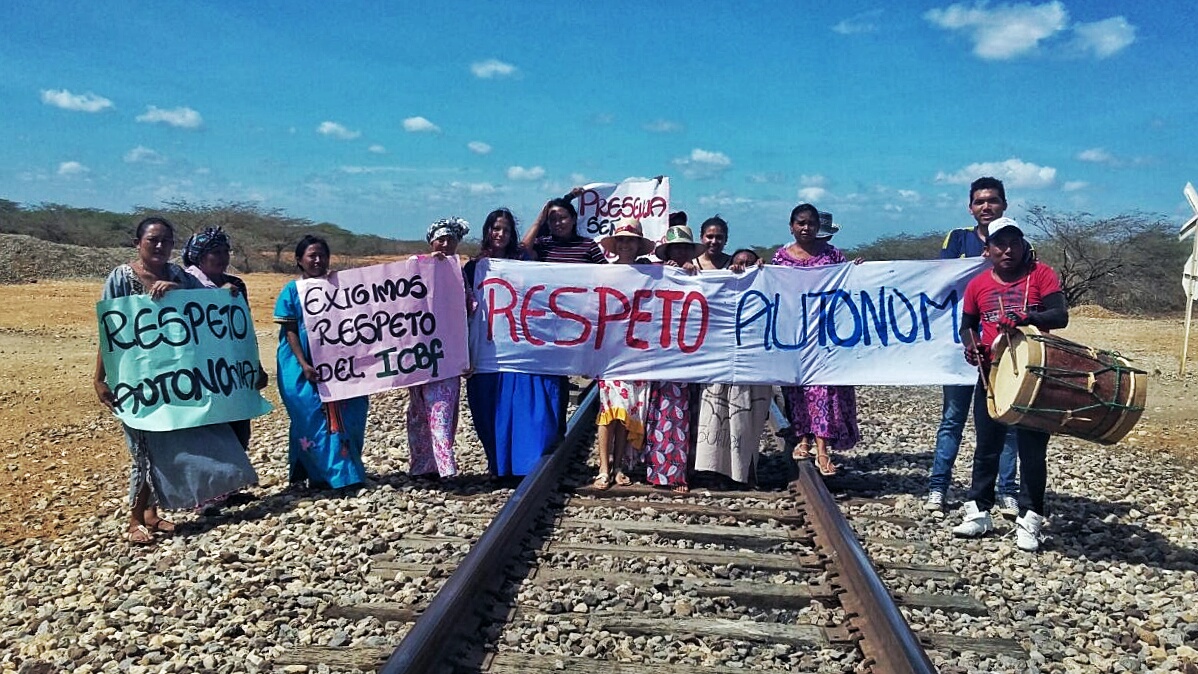 Colombia’s economy is rising. The country is experiencing a mining boom, particularly of coal. The coal-rich areas are often found in rural areas where indigenous communities live.In 1976 one of the largest open-pit coal mines of the world was built in the department La Guajira, in the Northeast of Colombia after signing a partnership agreement between the state (Carbones de Colombia SA), Carboncol and Intercor (subsidiary of Exxon). Today the mine named Cerrejón is owned by Glencore, BHP Billiton and Anglo American to equal parts and it is producing 32 million tons of coal per year. The Wayuu, an indigenous group of around 300’000 people, has lived in the department of La Guajira for already 3000 years. The area is semi-arid with forty percent of the area considered desert. To construct the mine entire Wayuu villages were forced to give up their land. They were never consulted on the construction of the mine.

The indigenous people put the blame on the absent state that is not protecting their rights and is instead selling them out to the multinational corporations for profit.

In 2012 the mine operators applied for a license to divert the river Bruno, one of the only still accessible water sources in the region, to get to the coal that lies underneath. The state approved the project.

Water supply has always been one of the Wayuu’s central concerns for drinking and sustaining food production in the dry area of La Guajira. The diversion of the river would have led to the complete monopolisation of the water in the region of La Guajira. This would have left the indigenous communities depended on the mine operators to provide them with water as the state delegated this task to the mine.

The Wayuu people opposing the river diversion started to become more organized, forming opposition groups that eventually turned into a social movement with the support of the labour union Sintracarbon, social and environmental organisations, melting into a collective subject that protested against the diversion. The slogan became “minería sí, pero no así” (mining yes, but not like this). The movement brought the case through all legal instances up to the Constitutional Court of Colombia which rejected the diversion of the river.

The struggle to keep the river Bruno in its original place shows that the indigenous group well-organised and together with various activists are able to form a strong movement against new life interferences on part of the mine. It also shows, that the state is not willing to protect the rights of its citizens even if they protest strongly and on international level for their rights. It was not until the Constitutional Court of Colombia considered the project to go against national and international human rights of the Wayuu that the project was cancelled. The Court blamed the national state’s corruption and mismanagement for the limited access to food and water and provision of public services.

As Foucault states, power is based on knowledge. In this case, it was a struggle of political power between the Wayuu, the state and the mine operators. Foucault argues that power is always connected to knowledge. This could be seen in the case of the water conflict. The indigenous people acquired sufficient knowledge over their rights, which was also possible through the various groups of activists, and they eventually won the legal case.

The Colombian state is taking an absent, but politically offensive role in the territorial and social conflict of the mine of Cerrejón and the indigenous community in La Guajira, Colombia. It violates the rights of the Wayuu repeatedly which we could also see in the example of the water conflict. Where the state is not directly violating indigenous people’s rights it is certainly not protecting their ways of life either. With an absent state, the mine operators are seen as the solution to the state’s neglect as they take over state-like tasks such as the provision of water, jobs and infrastructure.

The Wayuu community has formed a well-organised movement. The battle against interferences on their lives from the mine operation is still ongoing, but the Wayuu community, seems to be growing and gaining more knowledge over their rights and thereby more power.