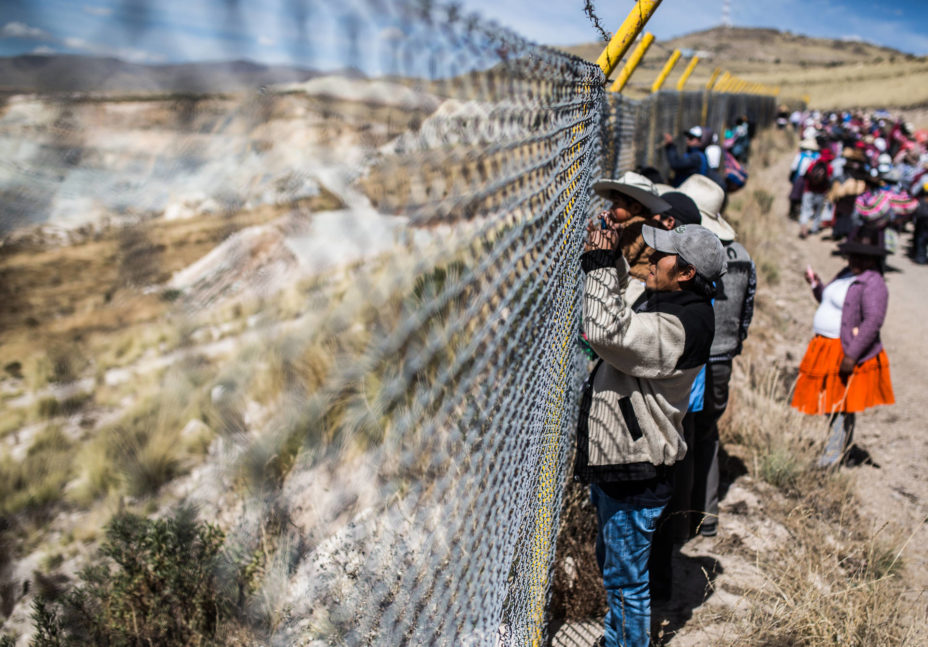 Source of the Picture: Swissinfo.ch. See the multimedia  story on the recent environmental protests in the Tintaya mine developed by Swissinfo.

On November 12, 2019, 13 rural communities in the province of Espinar started a strike. The communities protested over the alleged impacts that the extension of Peru largest copper mine (Glencore’s Tintaya Antapaccay open pit mine) could have on their livelihoods.

The Tintaya-Antapaccay is a mine localized in the Peruvian Macro-Southern region and it has been the theater of conflicts since its creation by the state in 1981. Conflicts and protests around the mine are common and repetivive. Their causes are varies from pollution, death of cattle, perceived grievances due to the presence of the mine, redistribution of a fair revenue, unfulfilled commitments, etc. Each time they cause distrust among communities, the state, NGOs and companies and often escalate in violent confrontations. Conflicts around mining operation are not exclusive to the Tintaya mine but are a common feature that characterized the relationship between extractive operations and surrounding communities in Peru. These conflicts are labelled “Socio-environmental conflicts” are defined by the Ombudsman office as “a complex process in which sectors of society the State and companies perceive that their objectives, interests, values or needs are contradictory and that contradiction can lead to violence” (Defensoria del Pueblo, 2019).

Peru is a key player in the global mining industry. The Andean region possess one of the most important mineral wealth in the world and is the fifth country in the world with most mining investments in 2011 and the only so-called “developing country” in the top ten (Arellano Yanguas, 2011; Gronwald, 2015). Foreign Direct Investements dramatically increased since the 1990, when the authoritative government of Alberto Fujimori liberalized the economy and the mining sector, with a subsequent growth of the economy.

However, this economic growth linked to mining have not resulted in an better life for most of the Peruvian population, as access to services and poverty rates remains stable and low, especially in rural areas, where mining activities take place. 30% of the population is still under the poverty line and social inequality has increased in the last decades . In some region, the income tax or “canon minero” supposed to redistribute mining revenue has created wealth but in a very unequal way, created inequalities among the different regions and arguably fueled conflicts (see Arellano-Yanguas, 2011 for more details).

Social conflicts linked to mining activities have always existed in Peru, however, Peru the presence of conflicts have increased since the liberalization of the economy and is proportional to the increase of mining investment in the country. The tensions are displayed at the community-company interface, but many other actors play significant roles in the conflict and in particular, the state (which in turn have also different or conflicting interests from regional, local or national state agencies; Andrews et al., 2017 and Arellano-Yanguas, 2009).

The main tactic in these conflicts are strikes, occupation of the mine and road blockades, making it impossible for the company to go in or out of the mine and actually be able to take the minerals out of the mine. These protests are often the only strategy available for “host” communities to participate in negotiation and political processes. They have often unexpected results and tend to further contribute to future tensions, as company and government tend to privilege short term solutions (such as paying the communities) rather than tackle the underlying root of these conflicts: rampant inequality and – increasingly – water pollution. This tendency creates dependency over the mine from the community and the state. It spreads distrust among actors (such as neighboring communities) and in public institutions, fragmenting the social and economic fabric on the long term. It creates and reproduce a vicious circle of conflict as the only possible encounter between communities, state institutions and international mining corporations.